The highest summit in the Beacons, distinctively shaped and recognisable thoughout the whole area. The north-east face is the highest and most dramatic in the Beacons, but is perhaps marred by the lack of a lake at it’s base. Pen y Fan’s worst feature is the number of visitors it attracts and the wide path, “the motorway” that they have created. Relatively speaking, this is the third highest summit in Wales.

Very similar in shape and height, this summit is Pen y Fan’s twin. Rather than treating them as separate summits, it’s more appropriate to think of them a single twin-peaked summit, as they were in the past. In 1188, Gerald referred to it as Cadair Arthur, “so called from the two peaks rising up in the form of a chair”. Later sources give the name as “the Van” or Bannau Brycheiniog, “alluding to its two peaks” 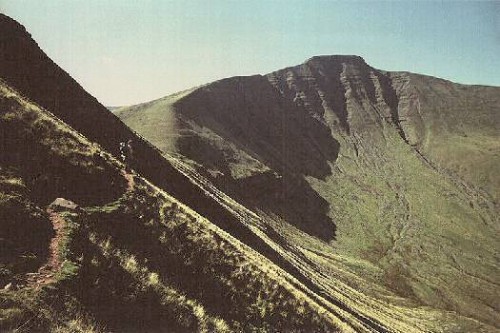